Poetry in the Library 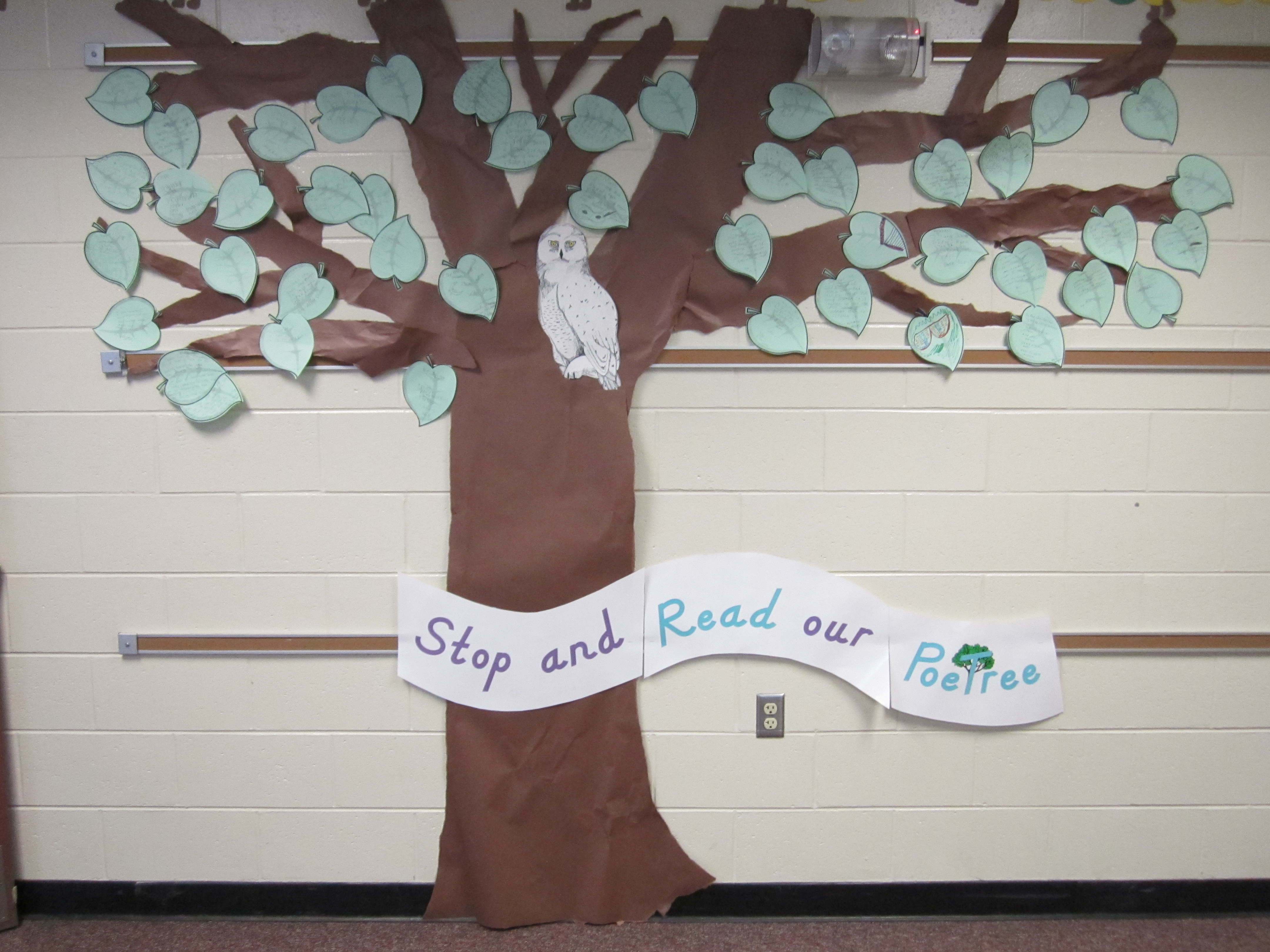 It happens every year:  We start gaining significant sunlight hours as the school year winds down, which means students get a little more wound up.  One of the ways I have enjoyed (and tried to channel) this extra student energy in April is by embracing National Poetry Month.

This year, for the entire month of April, I read a poem over the loudspeaker at the beginning of the school day.  Sometimes it was a poem by a well-known poet like Shel Silverstein, sometimes by a lesser known poet like Amy Ludwig VanDerwater and several times by one of our own Seward Elementary students or classes.  I had many positive comments about reading poetry each day, so it will definitely become a tradition.

I also created a PoeTree in the hallway, featuring green paper leaves with either copied or original poems on them.  The tree is still up outside the library door, if you’d like to come by and see what the students shared on the leaves. During library classes, we experimented with various forms of poetry as well.

The kindergarten classes wrote a list poem as a class, using a color as the basis.  We read a book called Red Sings from Treetops:  A Year in Colors by Joyce Sidman for inspiration first.  Then we discussed color and voted for one color as the focus of our poem.  The students worked in pairs to come up with a word or phrase that the color meant to them and then we ‘listed’ the words or phrases as the student pairs shared.

The K/1 classes worked on found poems, which are poems that use words found from other sources likes books, signs, newspapers, etc.  We read The Very Hungry Caterpillar together as a class, then worked with a partner to select words we liked as the book was read again.  Finally, the student pairs wrote one line to contribute to a class poem.

Second graders worked on found poems as well, with each student selecting a Zoobooks magazine and using words about a specific animal as the inspiration for the poems.   The students had time to read through the magazine and use a separate sheet of paper to write down the words or phrases that appealed to them or that described the animal well.  Again, the results were amazing.

The third through sixth grades ‘played’ with a variety of poetry forms, but the form that really stands out is the blackout poetry the students created.  Students took a page from books or magazines (taken from old books and magazines or copied) and selected words or phrases within that page that appealed to them.  Then, they took markers and blacked out the remaining words until their original selections were left.  Several of the 5/6 grades’ poems are taped up on one of the library windows. Several classes cycled through poetry centers during library, which included poetry forms such as

I had a blast teaching poetry and watching the students become inspired and their imaginations come alive.